The explosions occurred every ten seconds for three hours. 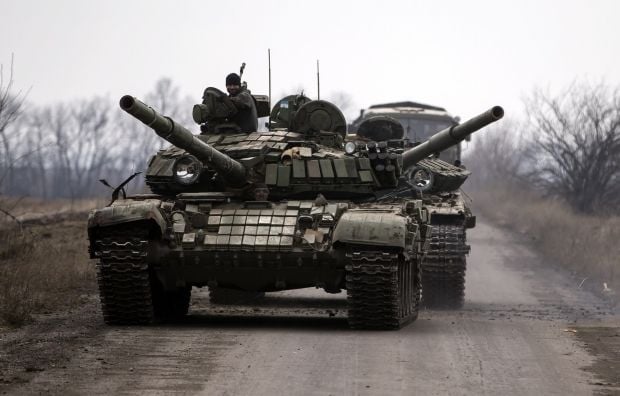 Shelling in east Ukraine was so intense on Tuesday (18 February) that there were 1,094 explosions in the town of Kadiivka alone between 5:35 and 8:30, international monitors have said.

That amounted to an explosion every ten seconds for three hours, EUobserver reported.

The "marked spike in ceasefire violations" in the Luhansk region went on for six hours and included 2,500 explosions in total, as well as "bursts" of heavy machine gun and small arms fire, the monitors, from the Organisation for Security and Cooperation in Europe (OSCE), also said in a report out on Wednesday.

The OSCE did not say who was responsible.

But the Ukrainian army said the spike came when "Russian occupation troops" shelled it with high-caliber artillery and mortars before launching a ground assault "through the frontline", resulting in one fatality on each side.

The Ukrainian version was broadly corroborated by the EU's embassy in Kyiv on Tuesday.

"The EU expects Russia to make full and immediate use of its influence on the armed formations it backs in this regard", he added.

Five EU countries also placed Russia at the scene in a statement at the United Nations Security Council (UNSC) in New York the same day.

"We call on the sides for full compliance with the ceasefire and in particular on Russia to use its considerable influence over the armed formations it backs," Belgium, Estonia, France, Germany, and Poland said.

Russia's show of force might have been meant to gain leverage in ongoing peace talks with Ukraine, France, and Germany.

But whatever its political logic, for some it also highlighted the implausibility of Russia's old claim – that it has no armed forces in east Ukraine.

"It would be wrong to say the Kremlin is responsible for whatever happens there," the Kremlin's spokesman, Dmitri Peskov, said on Tuesday.

And previous Russian denials have spawned diplomatic euphemisms over the years.

The OSCE, for instance, spotted Russian-type tanks, rocket launchers, artillery, anti-aircraft guns, and armored personnel carriers in what it referred to only as "non-government controlled areas" in east Ukraine in its recent reports.

EU diplomats also tend to speak of "Russia-backed formations" or "foreign armed forces" instead of "Russian troops" in east Ukraine.

But for Ukrainian diplomats the intensity of enemy firepower gave the lie to Russian claims that the Ukrainian military was fighting local separatists.

"The Russian Federation continues to supply its occupation forces [in the region] with weaponry, regular troops, and mercenaries to the extent that they now dwarf many European armies," Ukraine's UN ambassador, Serhiy Kyslytsya, said at the UNSC on Tuesday.

There were some 500 Russian tanks, 1,000 armored combat vehicles, 130 rocket-launch systems, and 800 artillery systems in Russia-occupied east Ukraine, he said.

"Just last year, the Russian Federation sent over 4,000 tonnes of weapons and munitions into the occupied territories in Donbas [in east Ukraine]," Kyslytsya said.

"We informed the EU about Russia's escalation and urged our partners to react resolutely," Tochytskyi said.

And for their part, Ukrainian military officers have, in the past, agreed.

"When I say the enemy, you understand this is the Russian Federation... Yesterday's miners can't find a tank in their mines and learn how to drive it without special training," a Ukrainian colonel who commanded the 93rd brigade in Luhansk last year told EUobserver at the time.