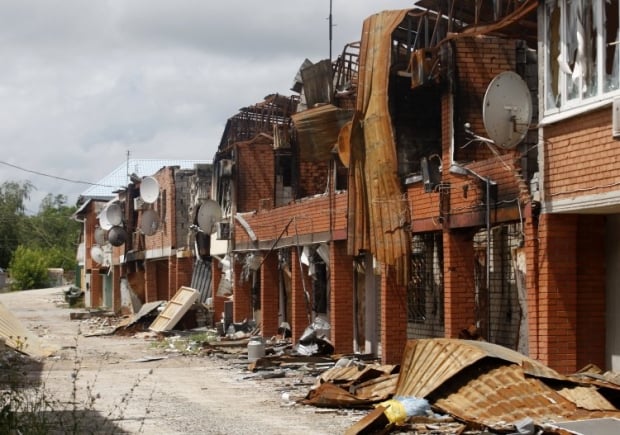 As of 08:00 local time on July 2 no militant units were left in destroyed Shyrokyne / Photo from UNIAN

As of 08:00 local time on July 2 no militant units were left in Shyrokyne, the JCCC's Russian team said.

"The self-proclaimed leadership has finally understood the need to implement the Minsk agreements. But it is very sad that it took too much time for them to realize that," head of the Ukrainian JCCC team, Major General Andriy Taran said.

"The cynicism of the situation is that the militants have in an emphatic manner decided to return the destroyed and deserted Shyrokyne to Ukraine, pending a new round off the Minsk talks, positioning their decision as compliance with the Minsk agreements," Taran said.

According to JCCC observers, there were no attacks on the village on Thursday. They also confirmed the withdrawal of militants from Shyrokyne, which lasted from Wednesday night to Thursday morning. At the moment, the illegal armed groups have taken their prepared positions to the east of Shyrokyne: near the villages of Sakhanka and Bezimiane.

A full ceasefire is now in Shyrokyne. The OSCE Special Monitoring Mission (SMM) to Ukraine and the JCCC are expected to establish a permanent observation post in the village soon.

As UNIAN reported earlier, the Ukrainian side in the JCCC asked the SMM to check if the militants had left Shyrokyne.