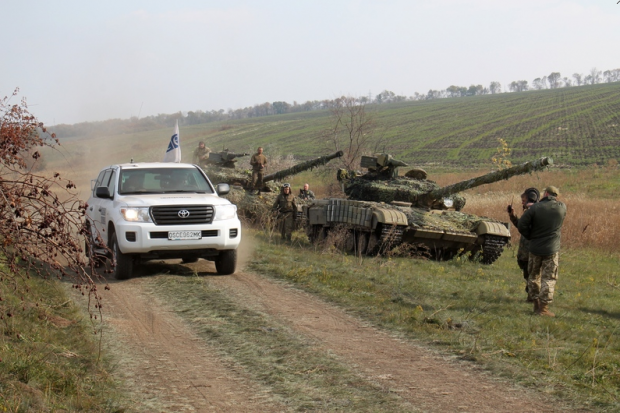 "On October 21, there were no violations of the Minsk agreements in the ATO zone. After the withdrawal of tanks from Debaltseve direction, our troops continued to carry out the second phase of the action plan on a pullback of weapons from the contact line. In Mariupol direction, the withdrawal has been completed, the procedure closely watched by representatives of the OSCE mission," said the statement.

As reported in the so-called "DPR" pledged to begin withdrawal of tanks from the area near Horlivka on October 22.

Read alsoOSCE spots 27 tanks of Russian proxies outside MariupolThe EU allows for the extension of the implementation of Minsk agreements for several months.

As UNIAN reported earlier, President of Ukraine Petro Poroshenko said after the Normandy Four meeting in Paris on October 2 that the Ukrainian side will start the withdrawal of weapons with caliber under 100 mm from the contact line in Donbas from October 3.

On October 16 the press center of ATO said that the Ukrainian military completed the withdrawal of mortars with caliber under 100 mm in the sector "A" of the ATO zone in Donbas, that is, in Luhansk region.