Bloomberg: Why Russia stopped at Crimea 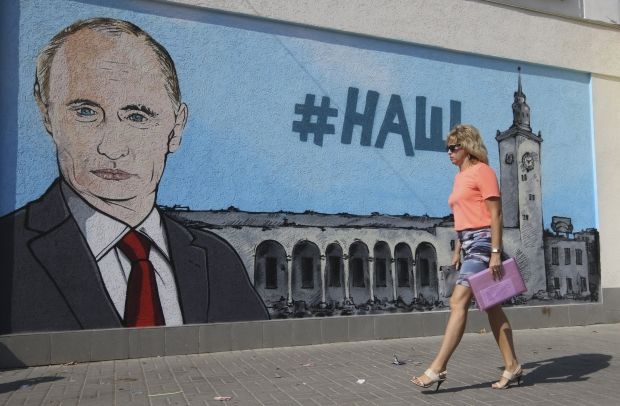 "A document published on Monday shed new light on why the annexation was bloodless – and on the limits of Putin's aggressiveness," Bloomberg View columnist Leonid Bershidsky wrote in an article titled "Why Russia Stopped at Crimea," published on February 22.

The news site Pravda.com.ua has published the transcript of a meeting of Ukraine's National Security and Defense Council that took place February 28, 2014. The previous day, Russian troops without identifying insignia helped pro-Moscow activists take over Crimea's parliament and government. The following day, the Russian parliament authorized Putin to start military operations in Ukraine.

The meeting's attendees, officials swept into power by Ukraine's "Revolution of Dignity," vainly sought to prevent the loss of Crimea to Russia, but effectively decided to give up the peninsula, believing the alternative would be worse.

Oleksandr Turchynov, the acting president and parliament speaker, raised the possibility of fighting back. Prime Minister Arseniy Yatsenyuk – who still is in office, unlike many others who came to power directly after the February 2014 revolution – opposed a counteroffensive.

"We're talking about declaring war on Russia," he said, according to the transcript. "Right after we do this, there will be a Russian statement 'On defending Russian citizens and Russian speakers who have ethnic ties with Russia.' That is the script the Russians have written, and were playing to that script."

Yatsenyuk pointed out that the Finance Ministry's bank account was empty and that, according to the Defense Ministry, Ukraine had no military resources to defend Kyiv if Russia invaded. Besides, Yatsenyuk said that there would be "an acute ethnic conflict" in Crimea and that the Ukrainian government would be blamed for failing to prevent it. He called for political negotiations through foreign intermediaries to grant Crimea more autonomy and in the meantime to try to rebuild the military.

Other attendees who spoke up against fighting back were acting National Bank Chairman Stepan Kubiv and former Prime Minister Yulia Tymoshenko, who had been freed from prison in the final days of the revolution. Tymoshenko argued that Putin wanted to play out the same scenario that unfolded during the 2008 Russian-Georgian war: Georgian President Mikheil Saakashvili attacked pro-Russian forces that held the rebellious region of South Ossetia, but Russia intervened and steamrolled the Georgian army. She said of Putin: "He is just waiting for us to give him an opening. Remember how Saakashvili swallowed his bait and lost! We have no right to repeat his mistake. So I'm calling on you to think seven times before we take a single step. I have to tell you, if we had one chance in 100 to win, I would be the first to support an active response."

Turchynov then got a call from the Russian parliament speaker, Sergei Naryshkin. After talking to him, he reported back: "Naryshkin passed on Putin's threats. He said they were ready to make tough decisions on Ukraine for persecuting Russians and Russian-speaking people. Perhaps they mean to send troops not just to Crimea. He passed on Putin's words that if a single Russian dies, they will declare us war criminals and pursue us throughout the world."

Then, intelligence service chief Valentin Nalivaichenko reported that Russian troops were massing at Ukraine's borders. He said: "The Americans and the Germans are all asking us not to do anything active because Putin would use this to start a large-scale invasion."

The council took a vote: Only Turchynov was in favor of declaring a state of war. And that was that: Russia held a spurious referendum in Crimea and took it over. The Ukrainian government gave up without a fight because it was scared of losing the entire country.

It is inconceivable that Putin didn't know how weak Ukraine was. He had access to intelligence from the neighboring country. He could even talk directly to the deposed president, Viktor Yanukovych, who had just fled to Russia. Nothing prevented a Russian invasion. Moreover, Putin didn't need an additional pretext to step in: Russia had already declared the overthrow of Yanukovych an "anti-constitutional coup" -- which, technically, it was, though the ex-president's oppressive regime had little regard for the constitution. It could have gotten Yanukovych to sign the kind of request for assistance that serves as a basis for Russia's current military action in Syria.

Yet Putin didn't do any of that. He didn't want to invade the rest of Ukraine and deal with the momentous international consequences. He only wanted Crimea, the Russian navy base populated mainly by pro-Moscow Russian speakers. Yatsenyuk had no illusions about Crimeans when he talked about the possibility of an "ethnic conflict."

Later, when Russia backed a separatist uprising in eastern Ukraine – providing military advisers, weapons and, eventually, troops – Putin was just as careful to avoid a full-scale invasion, even though he could have crushed the Ukrainian military. In fact, even though Ukrainian President Petro Poroshenko has boasted that his military is now "the strongest in Europe," Russia still has an overwhelming advantage in numbers, equipment and training.

Throughout the conflict, Putin has never been constrained by any threat of Ukrainian pushback. He doesn't want overt control of this or any neighboring country, just political and economic influence. In Ukraine, he wants to cripple the country enough that the West will be wary of taking it in, integrating it into European institutions. So far, that plan is working: Ukraine remains destitute and riven by internal strife.

Saakashvili, now governor of Odesa in Ukraine, has clearly learned his lesson: He is building a political force with a declared goal of cleansing Ukraine of corruption. That kind of resistance is potentially much more effective against Putin than fighting back militarily. Western politicians should note this and, instead of building up military defenses in eastern Europe, concentrate on helping Russia's neighbors build effective economies and governments.